Don't Miss Out on the Best Festivals in Germany

Get your lederhosen and dirndls ready for the best festivals across Germany! Over 30 million tourists a year travel across the globe to take part in these celebrations of German culture, cuisine, and people. Discover more about these must-visit festivals of Germany.

This festival drawing over 6 million people to Munich, the largest city in Bavaria, takes place every – you guessed it – October. People don traditional costumes for a 16-day drinking and partying event where millions of liters are consumed at the beer halls all around town. The beers offered are exclusively from the six breweries within Munich, so it’s a great chance to try a few local specialties. Beer halls will offer traditional German beers at 6% alcohol, so grab a few and head to the beer garden for people watching and hear rousing German songs from your fellow revelers. The best part of Oktoberfest is the entrance is completely free! You can walk from tent to tent and sample the best beers and Bavarian cuisine from the region; you only pay for what you buy! 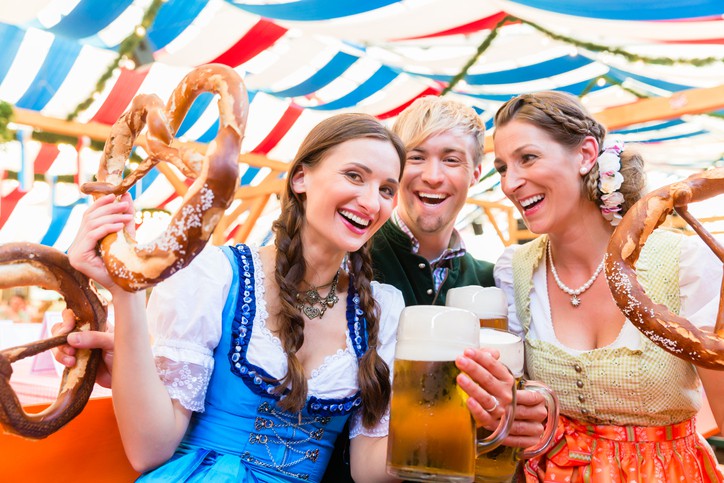 Every winter, stalls selling delicious pastries and sugar cookies pop up in squares with twinkling lights overhead during the world’s largest and best Christmas market.  The German Christmas market tradition dates back to the middle ages. While you’ll find smaller markets in cities around the country, Berlin has a monopoly on the biggest, brightest and most delicious Christmas market. Outfitted with vibrant and colorful lights, squares, shops, and restaurants around the city invite you in with their enticing smells. Within the squares, you’ll find vendors selling seasonal goods like handmade wooden Christmas ornaments, nativity figurines, hot cocoa, sweet-smelling lebkuchen (gingerbread cookies), and a deliciously warm and comforting spiced wine called glühwein.

Every September the small village of Bad Dürkheim hosts a popular festival that attracts over 500,000 visitors to enjoy popular exports of Germany, wurst (sausage) and wein (wine). This folk festival has been around since the 12th century and boasts the largest wine barrel in the world that visitors can step inside for a bite to eat. Walk along the ancient and winding cobblestone streets with your wine and sausage and watch the kids play carnival games, see quaint shops with regional mugs and steins, watche the firework displays, and more.

Sailors and landlubbers alike rejoice during the last week of June in Kiel, Germany for the largest sailing event in the world. Millions visit from around the world as roughly 5,000 sailors and 2,000 ships come to show off their skills during races and regattas throughout the week. Spectators can watch the races commence from boats and from land at the Bay of Kiel. On land, enjoy free concerts at stages across the city, international cuisine brought in specifically for the races, and street performances. A highlight of the event is the tall ship parade where sailing ships slowly cruise along the shoreline for everyone to watch.

Whether you’re on a romantic honeymoon or have the whole family in tow, now you can time your Germany vacation to experience some of the best festivals in Europe. Remember when you’re drinking your beer to exclaim the traditional German toast: Prost![/cotnainer]