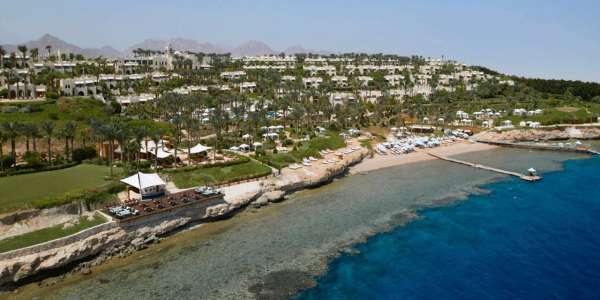 Egypt
Relax at any one of 4 resort pools
Enjoy diverse tastes at the hotel's on-site restaurants, relax at any one of four resort pools, or snorkel and dive among world-class coral reefs at the Red Sea luxury resort in Sharm El Sheikh, Egypt.
$350+
view deal
Luxury Link
Book by: Mar 14, 2023

Africa’s land area represents one-fifth of all land on earth. The continent stretches from the Mediterranean Sea in the north to the Indian Ocean in the south and is bordered by the Red Sea and the Atlantic Ocean. This vast land mass contains the largest desert and the longest river in the world, and its natural wonders include waterfalls, rain forests, mountains, and a crater. As you study the map of Africa, consider visiting one of these amazing landmarks.

The world’s largest “dry” desert stretches across the northern third of the continent of Africa. It consists of 3.6 million square miles of sand, shifting dunes and an occasional oasis. There is little or no vegetation in large expanses of the Sahara, except inside the manmade oases. Surprisingly, the Sahara alternates between desert and grassland every 20,000 years, so if you wait until 17,000 AD, you might find a great savannah covering the same area.

The highest single free-standing mountain in the world, Kilimanjaro rises out of the high plains of Tanzania’s northeast region. It is a dormant volcano with three cones that reaches a height of 19,341 feet, higher than any mountain in North America. The mountain is a favorite challenge for mountain climbers and is said to be harder to climb than Mount Everest. The best views of the famous mountain can be seen from Kilimanjaro National Park.

About 2½ million years ago, a huge volcano in present-day Tanzania erupted and collapsed on itself, creating the world’s largest inactive, unbroken and unfilled volcanic caldera. This crater is now home to a huge population of wild animals, protected by the establishment of the Ngorongoro Conservation Area. Visitors and safari guests might see lions, elephants, zebra, rhinos and cheetahs. There are no giraffes here; they are unable to descend the steep sides of the crater.

The Serengeti is an area of southern Kenya and northern Tanzania that witnesses the greatest migration of mammals on the planet when the giant herds of wildebeest head to greener pastures each year in December. Along with the wildebeest, there are zebras, hyenas, lions, and crocodiles. The name Serengeti means “unending grassland,” and that’s what it looks like until the flooding rains come and the beasts move on. The Serengeti National Park manages the conservation of the migrating animals, and a visit to the park is a must for your Africa tour.

On the border of the southern countries of Zambia and Zimbabwe, the Zambezi river comes to a dramatic drop into a lateral canyon 344 feet deep. This is Victoria Falls, the largest sheet of falling water in the world - known as “the smoke that thunders.” Visitors to Africa add this amazing sight to their bucket lists, and many adventurers plan white water rafting trips, bungee jumps and helicopter tours at the falls. The area is undeveloped except for a few tourist camps and guest lodges, so don’t miss the untouched wilderness around this natural wonder of southern Africa.

Get to Know the Other Side of Egypt

Africa: Conservation of the continent