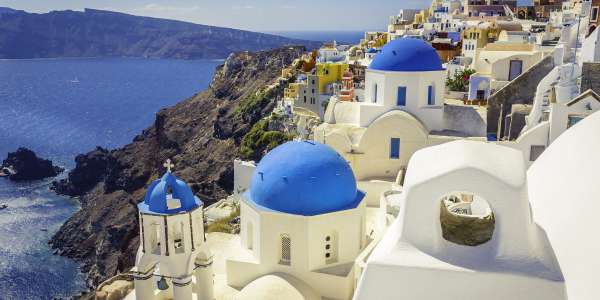 Greece
24/7 in-trip assistance
Head to Greece to uncover the essence of Athens as you visit its ancient Acropolis and soak up the atmosphere of the capital's vibrant neighborhoods! Next, go island-hopping to discover the paradise beaches of Mykonos and the sublime sunsets of Santorini, two of the most sought-after Greek islands.
$1,599+
view deal
Exoticca Travel US
Book by: Dec 04, 2022

England
After your tour of the sunny Greek Isles, head north to the historic sites of England. See modern museums, storied castles and quaint villages.
Germany
Travel through Greece to marvel at ancient ruins, then explore the medieval castles of Germany with their stone turrets towering over river valleys.
France
Both Greece and France have reputations for romance, from sunsets in the Greek islands to the famous landmarks of Paris, like the Eiffel Tower and the Louvre.
Switzerland
From the seaside islands of Santorini, Crete and Mykonos, head for the hills of Switzerland and explore alpine villages and mountain lakes. See Geneva, Zürich and Basel.
Ireland
Take in the dramatic seascapes, historic villages and rolling hills of Ireland when you’ve finished your exploration of the Greek isles.
Italy
Both Greece and Italy offer a glimpse into ancient worlds through their historic ruins. Tour the country of Italy, right next door to Greece and just as fascinating.
Spain
After a tour of Greece, take in the sights of Spain for delicious cuisine, active nightlife and beautiful cities like Seville, Barcelona and Madrid.
Portugal
Portugal's beaches rival those of Greece for windsurfing and sunbathing. Take a tour through the river valleys, vineyards and villages of Portugal after your Greek vacation.
Croatia
Set along the Adriatic Sea, Croatia offers tourists modern cities like Dubrovnik, westward facing beaches for incredible sunsets, and distinctive cuisine.
Czech Republic
Explore Eastern Europe with a tour of the Czech Republic after your vacation in Greece. Explore Prague, the City of a Hundred Spires.

Greece: The Cradle of Western Civilization

From ancient times, Greece has been at the center of the world’s civilizations, largely due to its geographical position in the Aegean and Ionian Seas. Often called “The Cradle of Western Civilization,” Greece is a crossroads in the Eastern Mediterranean, connecting the Middle East with Southern Europe. It is a country with thousands of islands, connected by boats and ferries and dotted with ancient ruins.

Greece is home to 18 UNESCO World Heritage sites, dating from the fifth century BC. The city of Athens, on the southern shore of Greece's mainland, is home to the world famous Acropolis, which sits on a rock outcropping around 500 feet above sea level. It includes the Parthenon, a huge temple built in 440 BC, one of the most important historic sites in the world. Originally planned as a citadel, the Acropolis contained a marketplace, the public square, and several temples — including the Temple of Athena Nike, a tiny sanctuary dedicated to the patron saint of the city.

One of the best-preserved Medieval towns of Europe can be seen on the Grecian island of Rhodes in the Aegean Sea. Appropriately called "Old Town," the city was built with strong stone walls, an impressive castle, paved pathways and elegant mansions. Historic sites are scattered through the island of Rhodes, including the Temple of Apollo, the Acropolis of Rhodes, and the Acropolis of Lindos. In ancient times, the island was protected by a huge bronze statue, the Colossus of Rhodes. Completed in 280 BC, it was considered to be one of the Seven Wonders of the Ancient World and stood at the entrance of the Mandraki Harbor. It was destroyed in an earthquake in 224 BC, and no trace of the statue remains today.

Visitors to Greece will appreciate the many ancient, historic sites that occur everywhere within the thousands of islands, but there are modern wonders, too. The islands of Santorini and Mykonos are favorite tourist spots with picturesque resorts and vibrant nightlife. On Santorini, whitewashed cubiform houses look out over the blue sea and the black, red and white sands of the volcanic beaches. Mykonos, lying southeast of Athens, is another scenic destination with colorful doors and stairways adorning the white buildings. Nicknamed "Island of the Winds," Mykonos is dotted with windmills and attracts sailors and wind surfers to its shores.

Greece vacations offer the history buff a world of ancient ruins to explore; but sun worshippers, hikers and boaters will also find their favorite spots among these thousands of sun-drenched islands.

Read More About Greece and Its Islands

Ferry Tales: Getting Around Greece on the Water