Arizona is home to some of the nation’s most photographed natural wonders: the Grand Canyon, the Colorado River, Monument Valley, Saguaro National Park and the Petrified Forest. These natural wonders have been revered by native tribes and modern tourists alike, but there are a number of manmade wonders in the Grand Canyon State that deserve some awe. Here are seven man-made marvels to visit in Arizona. 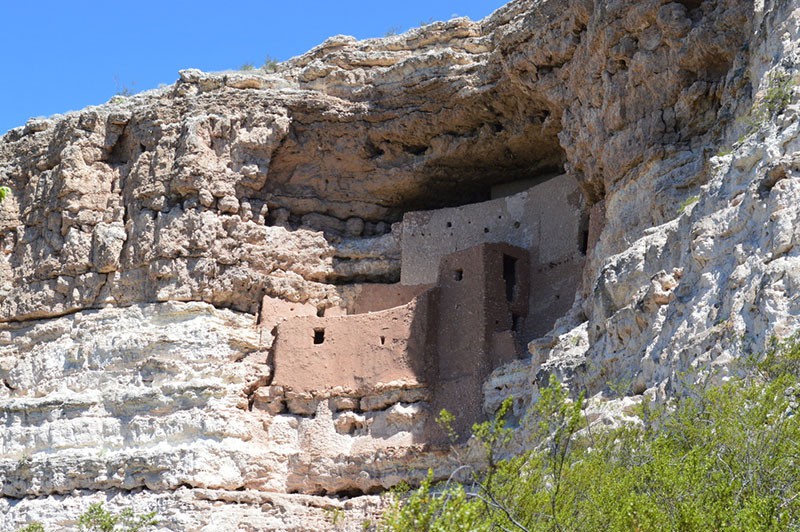 Montezuma had nothing to do with this castle. Groups of miners and soldiers in the 1860s came across the prehistoric cliff dwelling above Beaver Creek and mistakenly named it after the famous Aztec Emperor. The dwelling, built of brick and mud around 1100-1400 AD, had been long abandoned by the time Montezuma was born.

The structure was used as a sort of high-rise apartment building for as many as 20 families of the Sinagua civilization. Anthropologists believe it was built in the high cliff to avoid the periodic flooding of Beaver Creek. Inhabitants must have climbed into the cave from the canyon floor via portable ladders.

Visitors are not allowed inside the dwelling anymore, due to the danger of falling and possible destruction of historic artifacts. Still, it is an amazing sight to see a 20-room mansion perched in the wall of a limestone cliff. 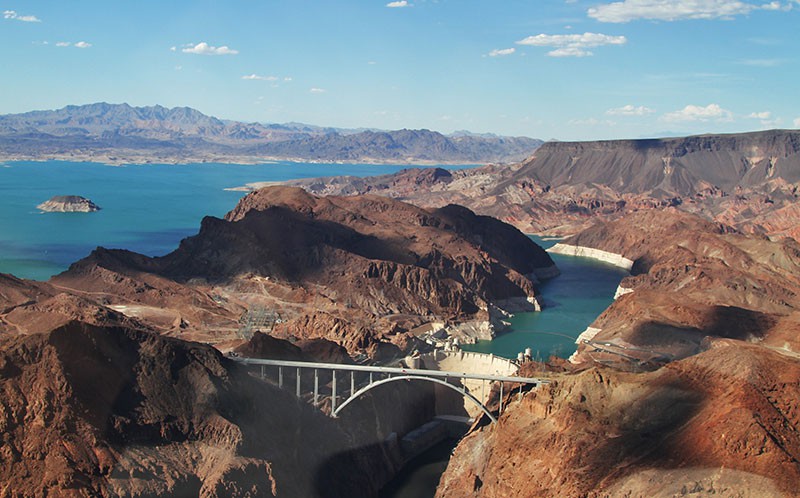 An engineering masterpiece built during the Great Depression, the Hoover Dam holds back the waters of the Colorado River in Black Canyon, Arizona, creating the world’s largest reservoir. The massive concrete structure is over 726 feet high, and 45 feet thick at the crest. Lake Mead, the reservoir formed by the damming of the river, is 112 miles long and nearly 600 feet deep.

The dam was built to control floods, provide irrigation water and produce hydroelectric power. It also employed 3,000 to 5,000 men at a time when work was scarce. The contractor, called Six Companies, also had to build a town to house the workers. Contrary to myth, no one was buried alive in the concrete.

After six years of construction, and more than 100 deaths (mostly from falling rocks), the dam was dedicated in 1936 – two years ahead of schedule. The Hoover Dam is expected to endure for at least 10,000 years, perhaps outlasting human habitation on Earth.

Jerome and the Sliding Jail 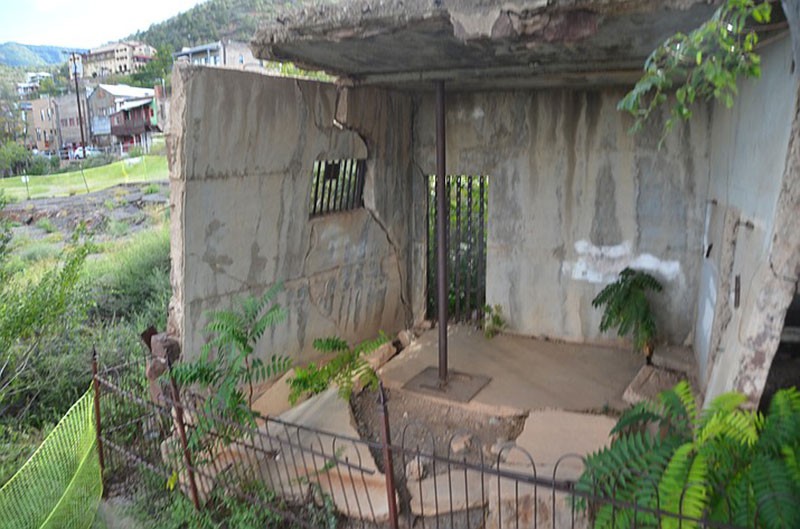 Once called “the wickedest town in America,” Jerome, Arizona was a wild-west style mining camp founded in 1898. Gambling, brothels, gun fights and general lawlessness prompted the building of a jail – a concrete cell block within a wood and tin building. Soon, Jerome grew to a population of around 15,000 people – but there was a problem.

Jerome is built on a steep hill between Flagstaff and Prescott, Arizona. The steep terrain posed construction challenges, and in 1938, the jail cell itself detached from its building and made a run for it. It wasn’t the only building in town that slid down the hillside, but it continued its slide until it rested around 225 feet from where they built it. Unfortunately, it stopped in the middle of a road.

Today, tourists love the little ghost town on the hill. Only 400 residents remain, and they are mostly law-abiding citizens. The jail has been stabilized with retaining walls and an iron fence but is no longer used. The historic town is a favorite tourist stop, second only to Tombstone in popularity. Okay, it’s not a manmade marvel, but a jail that makes an escape attempt is worth a visit.

The SkyWalk at Eagle Point 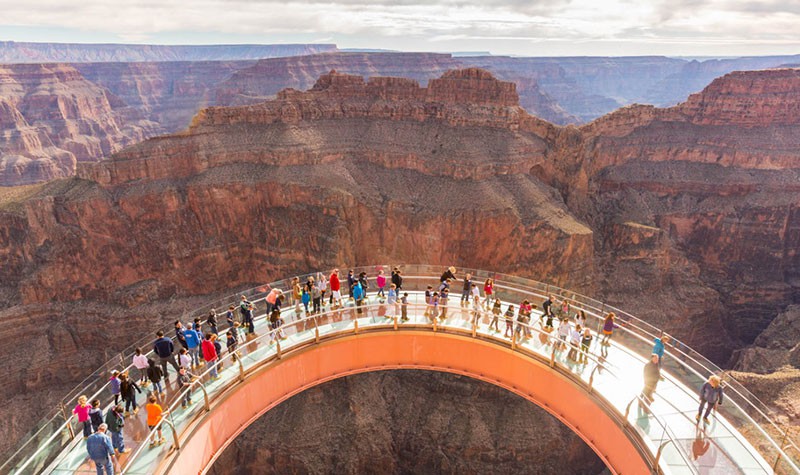 Although Jerome was a manmade disaster, let’s hope the SkyWalk proves to be more enduring. This structure is probably the scariest way to see the Grand Canyon. It is a horseshoe-shaped walkway at Grand Canyon West that juts out from a cliff 4,000 feet above the canyon floor. To make it even more terrifying, it is made of glass – so you can see right through it.

Everyone venturing out on the SkyWalk wears special slippers that won’t damage the glass. Most people walk on the edges where a solid rim exists under their feet, but some brave souls walk right down the middle where nothing but clear glass exists below them for nearly a mile. Many people hold tightly to the railing.

This is a spectacular way to see the canyon, without a doubt. The Walkway can withstand a magnitude 8.0 earthquake, and visitors are assured that it is strong enough to bear the weight of seventy 747 passenger jets. 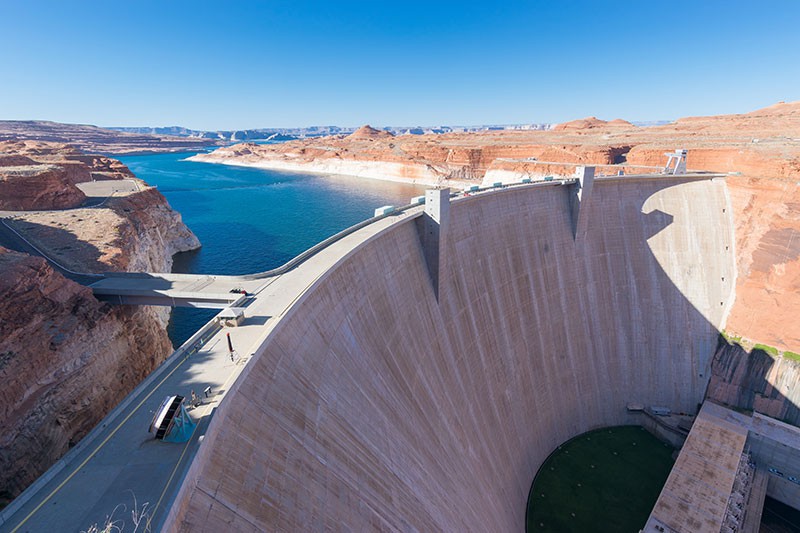 Lake Powell was created by the flooding of Glen Canyon, and was named after a one-armed Civil War vet who explored the river in 1869. It is ironic that the lake bears his name, because John Wesley Powell’s plan was to settle the land, not flood it. The lake is the second largest reservoir in the country after Lake Mead, but vies for first place in years of drought when Lake Mead levels fall.

The flooding of Glen Canyon was a tragedy that did not have to happen. A well-meaning activist named David Brower objected to damming the river in Echo Park, where the original dam was planned. He thought that area was so rich in archeology and natural beauty that it would have been terrible to flood it. At the time, he had not visited Glen Canyon.

When the decision had been made to move the dam to Glen Canyon, Brower visited the area and was devastated to find the same scenic, cultural, and wilderness qualities he had seen in Echo Park. Over 80 side canyons in the colorful rocks contained clear streams, a wealth of wildlife, stone arches and many Native American archeological sites – all lost beneath the waters of Lake Powell. Forever after, Brower considered the loss of Glen Canyon his life’s failure. 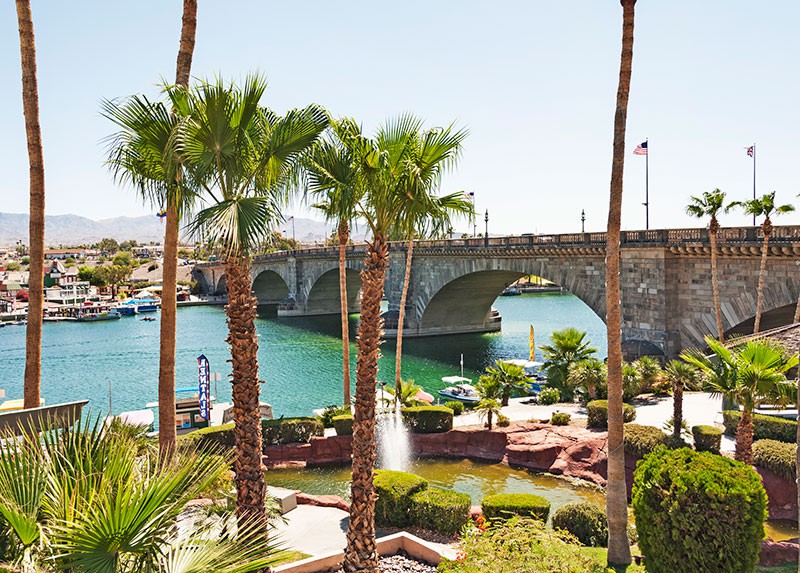 Yes, the world-famous London Bridge is now in Lake Havasu, Arizona. Built in 1830, it originally spanned the Thames River in London. When the burden of modern traffic threatened to collapse the bridge (London Bridge is falling down), it was put up for sale by the City of London. It seemed a ridiculous idea. Who would buy a bridge that had to be moved?

Then came a real estate developer, Robert P. McCulloch, who was trying to attract settlers to a retirement village on the shores of Lake Havasu. It was a forlorn desert area with no redeeming characteristics, but McCulloch thought having a London Bridge there would attract tourists and residents.

The project to move the bridge was the manmade marvel. Concrete blocks had to be individually numbered so they could be reconstructed in their proper places. The bridge was shipped across the ocean and reconstructed in Arizona. It took three years to rebuild, and it did not span a body of water until McCulloch dredged a canal beneath it. His gamble worked. Tourists and residents flocked to the site, and he completely recouped his investment. (And if you believe that, I have a bridge to sell you.)

White Dove of the Desert 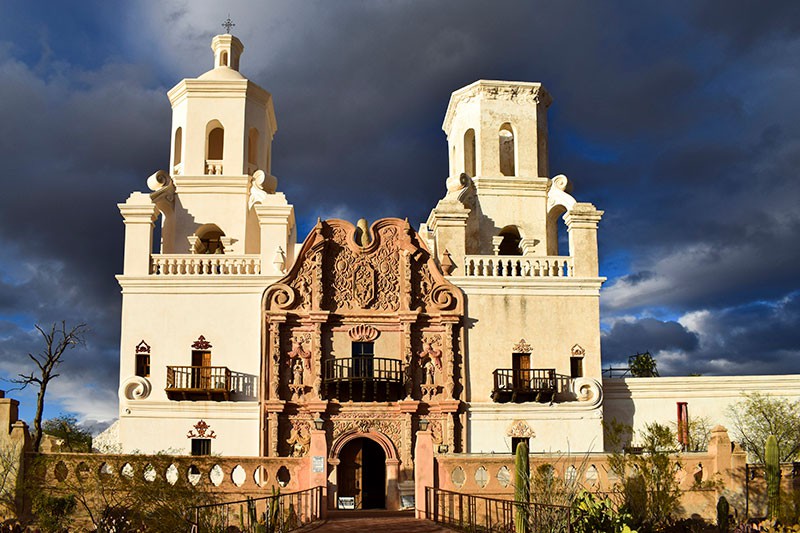 The only religious building on our list is this ancient mission church called the White Dove of the Desert. Started in 1783, the Mission San Xavier del Bac took 14 years to complete and now stands in a Native American reservation near Tucson. It is the oldest European-style building in Arizona.

The church is built in the classic Latin cross design, and visitors can look up and see the inside of the church dome that rises 52 feet from floor to ceiling. The sanctuary seats 250 people, and is filled with 18th century statues and artwork. The church itself was never finished, and is constantly being refurbished to save its crumbling structure. Remarkably, it was damaged by an earthquake in 1887 and struck by lightning in 1939. It survived a minor flood in 1978.

The marvel is that it is still standing in all its glory, and is still used for mass, baptisms and marriages as it has been for nearly 240 years.

Find Hotels in the Western U.S.

Get Your 3rd Night Free In Santa Barbara

3-Nt Mexico Cruise on Navigator of the Seas

Arizona Hotels with the Most Spectacular Views