Make Way for Gargantuan of the Seas

Actually named the Harmony of the Seas, this behemoth is now being built and will splash in April, 2016. It will be the world’s largest cruise ship. If you have ever seen The Allure of the Seas, or her sister The Oasis of the Seas, you have some idea of the dimensions of the Harmony: huge.

The Harmony of the Seas is being built at STX France’s Saint-Nazaire shipyard, unlike the earlier Oasis class ships which were built at the STX’s shipyard in Turku, Finland. Like her sisters, the ship is 16 decks tall and features a hollow area that holds a replica of New York City’s Central Park and a Boardwalk. Balcony rooms overlook the tree-lined paths of the park, giving the ship a choice of balconies: ocean view or park view.

If you can’t afford a balcony room, don’t worry. Your inside stateroom will have a virtual balcony. Open the curtains, and you are looking at the view from an outside deck brought to you electronically on an 80-inch tall high-definition screen. You can enjoy real-time views and sounds of the ocean from the comfort of your cabin. 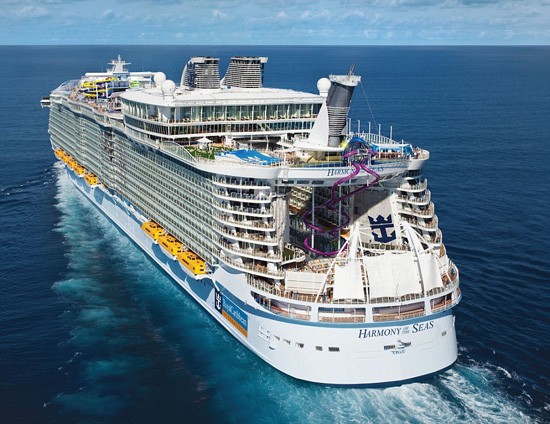 Passengers of the Oasis class ships report that the ship, even when absolutely full, does not feel crowded. The expansive open areas, along with the dozen or more restaurant options, give it a spacious feel. There are four pool areas on the Oasis and the Allure, and there will be four on the Harmony, including the adults-only Solarium. The Oasis class ships were the first to feature zip lines at sea, and each has a full-size merry-go-round. Other cruising innovations brought to the waters by Royal Caribbean include water parks, bumper cars, ice skating and onboard surfing. Every RCI ship also has a climbing wall or two. 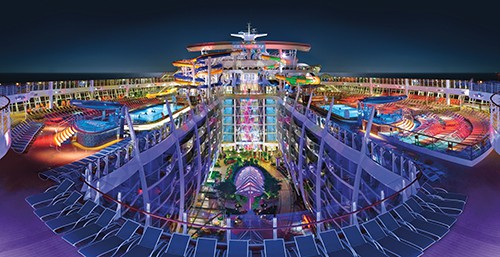 The Oasis of the Seas and the Allure of the Seas sail out of the convenient Port Everglades cruise port in Fort Lauderdale, Florida. They feature 7-day cruises to the Caribbean, with ports in the Eastern and Western Caribbean including Labadee, Falmouth, Cozumel, Nassau, St. Thomas and St. Maarten. The Allure also sails across the Atlantic to do 7-day cruises in the Mediterranean with ports of call in Rome, Naples, Barcelona, Mallorca and Marseille.

7-Nt Alaska Cruise on Brilliance of the Seas

4-Nt W. Caribbean Cruise on Adventure of the Seas

4-Nt W. Caribbean Cruise on Adventure of the Seas

3-Nt Bahamas Cruise on Mariner of the Seas

7-Nt Bahamas Cruise on Serenade of the Seas

The 225,282-ton, 5,400-passenger Oasis of the Seas, which launched in December 2009, is currently the world’s largest cruise ship. It’s a whopping 40 percent larger than the previous title holders, Royal Caribbean’s Freedom-class trio. Sister ship Allure of the Seas debuted in fall 2010. The Royal Caribbean fleet has had the largest passenger ships on the water since 2006, when the line debuted Freedom of the Seas, an enhanced version of the Voyager-class ships. The Freedom was just barely larger than the reigning Queen Mary 2, surpassing it in tonnage only.

Royal Caribbean has been on a building binge lately. In 2014, it launched the Quantum of the Seas, and in 2015, that ship will be joined by the Anthem of the Seas. With the debut of the Harmony of the Seas in 2016, the line will be able to carry an almost unbelievable 75,000 passengers on its 26 ships at one time.

If you haven’t cruised yet on the Oasis class ships, don’t despair. By 2018, there will be four of them on the waters of the world. I’m pretty sure there is room for all of us.

What Went Right on Board the Viking Sky?

Sea Day Gets an A+ on the MSC Meraviglia