More Cities To Explore With Your Palate

For all you foodies out there, the anticipated Part Two of Best U.S. Cities for Foodies is served! You’ll be salivating with eagerness to read all about these classic staples and up-and-coming trendy hotspots. 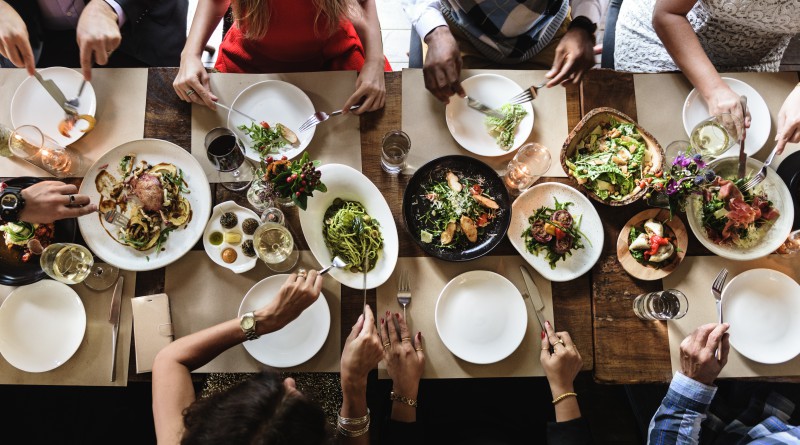 A list of best foodie cities would not be complete without The Windy City. From epic delights like deep-dish pizza (you better get some at Pizano’s or Lou Malnati’s) or quirky pickle tastings at Big Jones, there is a tasty treat to impress every palate. For food lovers, a trip to Chicago must consist of a stroll through the Fulton Market area of Chicago’s West Loop. The average age on this side of the city is 32.8 years old, which helps explain its bustling personality filled with hip boutiques, scrumptious eateries, eclectic art galleries and more. Farm-to-table options and craft beers are available in abundance throughout Chicago like The Bristol in the Bucktown section or Farmhouse in River North. One really cool Chicago gem is a restaurant true to its name: Intro. This is definitely one of the most unique restaurants I’ve come across in any of the cities on this list. At Intro, rising culinary stars triumph during short stints of a few months and all dishes change with their chef creators. Named among the “Best New Restaurants of 2015” by Chicago Magazine, this is a must visit next time you’re in Chi-Town. One final restaurant worth mentioning is one whose average price tag may shock you. But, if money is no object, you’ll want to be sure to add RPM Steak to your bucket list, where you can enjoy a 60-day-aged 38-ounce Long-Bone Ribeye for $125. Many Chicago favorites also have a BYOB policy so check it out before you head out.

Don’t judge a city’s cuisine by its size. Certainly the smallest city to make this list with a population of around 84,000, Asheville is a rising star when it comes to culinary indulgences. Probably better known amongst laid-back hipsters and craft beer fanatics, Asheville is home to a plethora of incredible breweries, hence its nickname “Beer City, USA.” But that definitely doesn’t mean Asheville is one-dimensional. Bring a crowd for carefully and deliciously constructed tapas at Curate. Nominated for a James Beard award, this restaurant prides itself on good food, good wine and good company in Asheville’s historic downtown area. For authentic southern cuisine, check out Tupelo Café, especially for Saturday or Sunday brunch. Keeping up with the Southern Theme is the King James Public House spot, where the late night menu (beginning at 10 p.m.) is a must. If you are a pizza lover at heart, no trip to Asheville is complete without a visit to All Souls Pizza, which sources local and organic ingredients to make the most mouthwatering pies. From fan-favorite polenta pizza with crimini mushrooms, kale, roasted garlic, onions and mozzarella, to creative takes on traditional pies with soppressata, oregano, garlic and aged sheep cheese, the treasures of Asheville will leave your taste buds tingling.

The Golden Gate City is known for much more than technology start-ups and a famous red bridge, and we’re not the only ones who’ve recognized it as a top foodie contender. To date, 50 restaurants in San Francisco have been awarded with Michelin Stars, five of which boast the highest level of three stars. At three-star Michelin winner Manresa, indulge in a nightly tasting menu locally sourced with the best ingredients of that specific day.  Three-star winner, Saison, is another can’t-miss spot with its 18-course feast that changes with the season. For more low-key but just as delightful experiences, treat yourself to the hand-rolled crust of seasonal pies at Mission Pie or authentic, hand-crafted Four Formaggi or Funghi pizza at Pizzeria Delfina. One unique way to explore all San Francisco has to offer your taste buds is with an Avital Food Tour. These walking tours are available in four areas: Union Square, North Beach, the Mission District and Haight Ashbury. You’ll have the opportunity to not only taste scrumptious foods but to talk with the local chefs and restaurant owners to bring your dining experience in this city to a whole new level. The tastings on these tours are structured from appetizer to dessert so you’ll get the full experience at multiple stops. (Tours range from $72 to $84 per person and last between two to three hours.) The details and depth to gastronomy in San Francisco certainly earned it a well-deserved spot on this list. Be forewarned though; you will pay a premium for dining (or anything for that matter) in this metropolis. According to Business Insider, the cost of living there is approximately 63% above the national average and the cost of dining specifically is almost double the national average for “mid-range spots.”

Everything in Charleston from the streets to the restaurants and cuisine you digest is utterly charming. One of the best parts of Charleston’s gastronomy is its unique influence from Lowcountry, a region along South Carolina’s coast. Husk, which you’ll find inside a lovely Victorian-era home, considers itself a “celebration of southern ingredients.” Chef Sean Brock, a James Beard Award-Winning Chef, changes the menu daily, and is very strict with what ingredients he allows to enter the building. You won’t find a single element in his dishes that isn’t actually sourced from the south, which is reflected in all his dishes from Deviled Eggs to South Carolina Shrimp and Carolina Gold Rice. If you believe that “Food is Good” then FIG (its acronym) is definitely a place you’ll want to visit. What makes this restaurant unique is the true freshness of its ingredients as there is no walk-in fridge for storage at all in the kitchen. This is another restaurant that focuses on bringing out the unique, locally sourced flavors of Lowcountry. If seafood is your calling, head to FIG owner & chef’s second hotspot, The Ordinary. Both the atmosphere and the food at this seafood & oyster hall is amazing, as its set in a beautiful old bank. Be sure to order one of their signature Shellfish Towers. For the younger crowd, Budget & Bee, a BYOB craft-sandwich shop is both affordable and delicious. It’s a local favorite that’s especially popular for late night food after most of the other Charleston restaurants have closed their doors. The menus change daily and can only be found on social media or chalked on the restaurant’s huge blackboard. A stop in Charleston would not be complete without a homey-feeling meal from Hominy Grill. Do not leave here without ordering the famous Charleston Nasty Biscuit – a delectable fried chicken biscuit sandwich with cheddar cheese and sausage gravy. The Jalapeno Hushpuppies and Okra and Shrimp Beignets are other musts.

Though popularly referred to as The Music City, Nashville should also be recognized as a top foodie city, especially for those who love barbeque. Martin’s Bar-B-Que Joint is a must when creating a restaurant bucket list for this city. Everything at this joint, including the sauces, is made from scratch daily while a fresh hog is put on the pit every day for the following one. The ribs here are an absolute requirement. If you don’t eat meat, don’t worry! You certainly won’t feel left out in Nashville with the restaurant Avo around. This menu is completely plant-based with no processed ingredients whatsoever.  On top of that, they follow a raw-food concept and don’t heat their dishes above 118 degrees in an effort to preserve the food’s natural enzymes and nutrients. To keep with the city’s BBQ theme, they offer delicious BBQ Sliders made of pulled mushroom. Don’t forget to wash your meal down with their signature cocktail, the AVOcado Margarita. Also in Nashville, there is consistently a line out the door for grub at Arnold’s Country Kitchen, and it’s definitely not because of its décor and ambiance. Though the menu is simple the taste is not, and you can easily see why it was featured on The Food Network’s Diners, Drive-Ins and Dives. Customers wait in line to order a meat (like roast beef or friend chicken) and a side (such as creamed corn or fried green tomatoes) for less than seven dollars. A signature Nashville dish is Hot Chicken, and if you’re craving this very spicy version of fried chicken, then you have to visit Hattie B’s Hot Chicken. For your entrée, they serve only this iconic chicken plus comforting sides and fulfilling desserts. If you think you can handle it, try the hottest level of heat also referred to as “Shut the Cluck Up.” For an upscale dining experience, head to The Catbird Seat. This multi-course tasting menu concept costs $115 per person and offers guests a plethora of interesting foods served at one big U-shaped table surrounding an open kitchen.

Culinary tourism has become increasingly popular among travelers, especially those who consider themselves foodies, and it is easy to see why. If you haven’t yet read through Part One of this list, we highly recommend you go and do so now. Happy travels!

Where to Find Vegetarian Meals in Kansas City