A Little Tour of the Big Island

Explore the Big Island of Hawaii

The Big Island of Hawaii is the largest of the Hawaiian Islands, with a land mass about the size of Connecticut. Similarities end right there. Hawaii has many surprises to offer the curious traveler, and if you are expecting a typical island-resort destination with high-rise hotels and surf-shop beaches, you will soon see the error in that assumption. 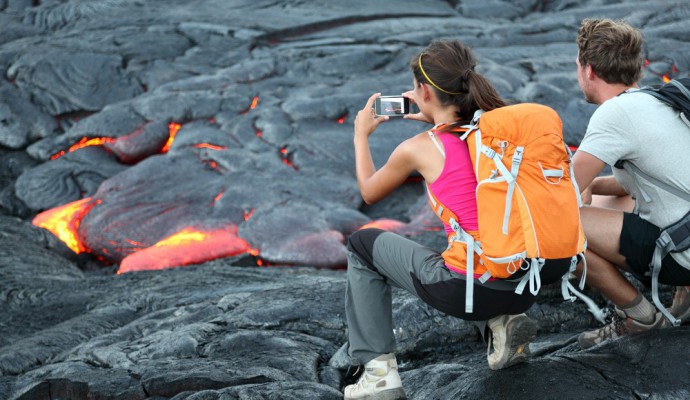 The Big Island of Hawaii boasts two large inactive volcanoes, Mauna Kea and Mauna Loa. Surprisingly few roads connect the east and west coasts of the island because of these two peaks. Highway 200, called Saddle Road, traverses this high ground, but it is dangerous to unprepared travelers. The air is thin, the road is rough despite recent improvements, and the summit is covered with snow during January and February.

A few car rental companies have just recently started to allow travel on Saddle Road, so check your contract. Do not attempt to drive over Saddle Road at night. If you want to see the mountainous center of the island up close, there are a few hiking trails for the adventurous (and experienced) mountaineer. You can also take a coach tour to the several observatories on the summit of Mauna Kea, but only as far as the visitor center.

Although Mauna Kea is the taller of the two summits at 13,803 feet above sea level, Mauna Loa is the world’s most massive volcano. Its flanks extend an estimated five miles below sea level, and at its center it is 183 miles deep. It last erupted in 1984, and geologists believe it will erupt again. To the southeast of Mauna Loa is a smaller, unconnected volcano called Kilauea that has been erupting continuously since 1983 from two different vents. The orange glow from the summit vent can be seen from a few vantage points along the caldera rim. The second vent lava flow, in the east rift zone, is highly unstable and not open to the public.

Kilauea claimed the Hawaiian village of Kalapana in 1990, burning the homes and covering the two highways in and out of town. The lava flow extended all the way to the coast, so it is no longer possible to drive around the perimeter of the island. The area is an eerie ghost town now, covered in some places by more than 115 feet of hardened lava. Volcanoes National Park, on the slopes of Mauna Loa, is open every day of the year, and a trip to Hawaii is not complete without a visit to this fascinating park. Helicopter rides over the active volcanic areas, rain forests and waterfalls are available at Hilo Airport. 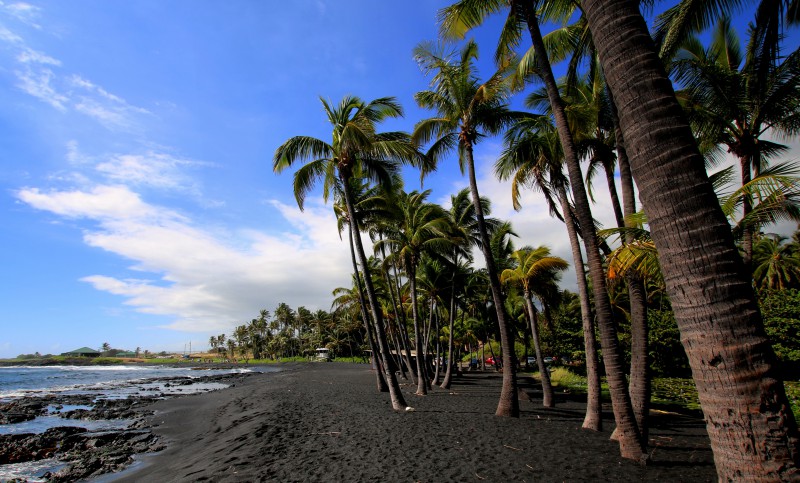 Much of the coastline of the Big Island is made up of large, volcanic rocks with little sand. But there are sandy beaches, and they are worth exploring. Beaches come in several colors on the Island of Hawaii. Here are the best of the Big Island Beaches, color-coded:

Golden Sand: The sun-drenched golden sand beach of your dreams happens to be in the sunniest spot in the United States, along the northwest coast of the island. Hapuna Beach, which is about 30 miles north of the town of Kailua-Kona on Highway 19, is a public-access beach with lots of parking. A long, wide stretch of golden sand meets clear blue water, and it’s a perfect place to spend a day, have a picnic, or just walk. Do be careful in the water when the surf is up. On most days, the swimming is excellent here, and lifeguards are on duty. But the waves are big, Pacific-style rollers, and can easily knock you off your feet.

Black Sand: You have probably heard of the black sand beaches of Hawaii. On the southern tip of the island, on the eastern side, is Punalu’u Beach, the most accessible of the black sand beaches. The sand is made by lava rock that is ground into sand by the action of the water and deposited by the surf. The Big Island is the only one with black sand, and without a major eruption of one of its three volcanoes, no more black sand will be formed. So, do not take samples. This beach is a must-see, and a great place to walk and explore. You may even see a sea turtle there, but do not touch, chase or bother these protected animals. Violators can be punished with hefty fines.

Green Sand: There is an amazing beach at the southern tip of the island where the sand is decidedly green. It’s not bright Kelly green because the green particles are mixed with black lava sand, but it has a green tint. The green color at Papakolea Beach comes from a crystal called Olivine, which is formed as magma cools. It is eroded from the surrounding cinder cone and deposited on the beach. This site does not have easy access. Once you get to the dirt parking lot off of Route 11, you have two choices to traverse the 2.6 miles to the beach: walk for about an hour, or pay a local driver $15-20pp for a round trip over very bumpy terrain in an SUV. Do not drive your rental car there! Walking is very pleasant, with gorgeous views of coves along the way. Simply walk to the water, take a left and follow the coast until you see a cliff ahead. The Papakolea beach trail requires a climb down a steep hill, but the reward is a sparkling green sandy beach and clean, swimmable water.

Native Hawaiians tell the story of the Goddess of Fire, Pele, whose spirit resides in the Kilauea Volcano. She is reportedly an angry goddess who was banished from her native island after a fight with her sister. Many stories exist about Pele and her large family, some that include dragons, gods, hatred, human sacrifices and conflicts. Today, it is said that if you take any lava rocks from the Island of Hawaii, you will be cursed by the spirit of Pele until the rocks are returned. Many hotels and resorts receive packages from guilty travelers wanting to return their souvenir rocks to Hawaiian soil, to end their bad luck. So, here is fair warning: Don’t take samples of the volcanic rocks or colored sands of Hawaii. Pele may punish you.