Check the Azores Off Your Bucket List - For Cheap! 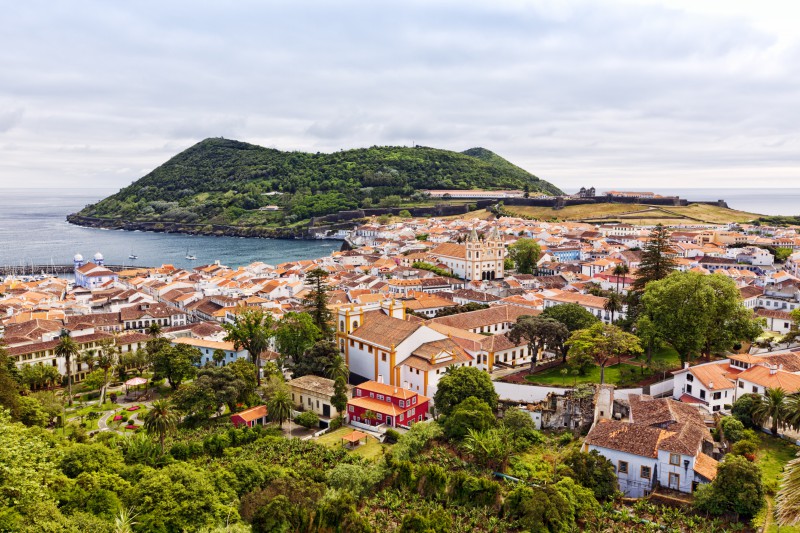 Suffering through the lengthy, bone-chilling winters of the northeast, there is an inherent need to get away come first sight of the awakening flowers beginning to sprout.  Mid-December of last year I found myself scouring deals for a new experience – perhaps a place I hadn’t even heard of. When I received an email titled “$499 — Portugal: Weeklong Azores Spring Adventure w/Air from Boston,” I thought, “WEEK-LONG? $499?! AMAZING! Are we going to the Azores? I think so!” I had never heard of the Azores, but had always wanted to see Portugal and love Europe, so I quickly jumped on the chance to put in my time-off request and booked our highly anticipated 7-day trip for two.  Also – this deal is major; it is the kind of deal typically only offered to the travel industry, but it’s available to the public!

Now, for those of you who were like me in my limited knowledge of the nine volcanic islands that make up the Azores, they are located west of Portugal in the North Atlantic Ocean. Açores [ɐˈsoɾɨʃ] to the locals, it is one of Portugal’s Autonomous Regions (the other being the islands of Madeira).  The Azorean islands span over 370 miles and consist of Sao Miguel and Santa Maria farthest to the east, the central islands of Terceira, Graciosa, Sao Jorge, Pico and Faial, and the most western islands of Flores and Corvo.  Ferry transportation between some of the islands during warmer months allows travel between the islands to be accessible, and there are three international airports amongst the islands.

The deal that I purchased was through Azores Getaways, and it provided non-stop airfare on Sata Azores Airlines from Boston to the island of Terceira. Interestingly enough, the northeast United States, Boston in particular, had been a popular landing place for immigrants from the Azores in the late 19th century. Since then, many and their descendants have emigrated back to their homeland, and travel between the Azores and the States is becoming increasingly popular. This also made it extremely easy to communicate with the locals as many of them speak English.

The vacation package also included seven nights’ accommodations, with daily breakfast. The $499 (taxes included) price advertised in the email was for a beautifully authentic hotel called Angra Garden Hotel, in the heart of the island’s main city of Angra do Heroísmo. Azores Getaways also offers other options, and for $202 per person, we decided to bump up our accommodations to another apartment-style housing at Casa das Cinco on the coast of Cinco Ribeiras, part of the city of Santa Bárbara.  The deal also included transportation from the airport to the hotel; I will elaborate on additional transportation recommendations later.

Our flight took off on a Wednesday in late April from Logan Airport on a 10:15 red eye. After a very quick four-hour hop over the Atlantic we had landed at Lajes International Airport at 7:30 in the morning the following day.  I assume the flight and crew were delightful, however I passed out once I buckled my seat belt and snoozed until the captain announced our arrival. The views as we landed were of bright green fields, spotted with cattle.

Upon deplaning and proceeding through customs (love getting that passport stamped!), we were greeted with a folder of maps, information about the island and deals on excursions. We soon discovered that our choice of hotel, while remote and intimate, required us to rent a car.  A friendly airport employee drew out on the map where we were to go to find our hotel. We were also told that once we exited the highway, if in doubt “always stay in front,” meaning when the roads split, always follow the option toward the coastline.

Renting a car was quite easy to do as there were three reputable car rental companies to choose from. Here is where I remind you that most countries outside of the States drive manual cars, and had this not been our first time renting a car in a foreign country, I may have remembered this in advance myself… Since we didn’t remember this minor detail, our failed attempts at trying to start and reverse our manual rental did not go far. We quickly swallowed our pride and headed back inside the airport lobby to see if our lack of skill would be accommodated with an automatic vehicle – and it quickly was.

Side note: Had we opted to stay at Angra Garden Hotel, the bus transportation from the airport to the hotel would have been quite handy.  The hotel is central to the main town of Angra do Heroísmo. Classified as a UNESCO World Heritage Site, Angra do Heroísmo is walkable, has incredible restaurants, shops and people.  Bike rentals are available to tour the area, or the hotel can also assist in renting a car for you once you are there.  The excursions available through Azores Getaways are also well priced and include transportation to and from the activity – if you are staying in Angra do Heroísmo.  No matter how you swing it, I highly recommend renting a car for at least one day, in order to explore the island on your own agenda.

Once we had a good laugh, we carried on our journey with our coveted map in hand and got on the highway toward Santa Bárbara and Casa das Cinco. By this time, it was 9AM and we were cruising through more lush, vibrant fields of cattle and eventually could see the other side of Terceira’s coast.  After about ten minutes, we exited the highway through several round-abouts toward Angra do Heroísmo.  As we drove through the city’s narrow, cobblestone streets, everyone was beginning their day with smiles on their faces, heading off to work and bringing the children to school. After asking for a bit more assured directions from a local policeman and some lost driving, we finally stumbled upon our hotel, Casa das Cinco.  We got in contact with the gentleman renting the property and he let us into the room we would be spending the next week in.

I’ve been a bit long-winded, but this deal was so great… I have much more to share – keep an eye out next week for part two!