You might visit Charleston, SC, for its historic mansions and formal gardens, or to see the spot where the Civil War began in the city’s expansive harbor. For history, southern cuisine, and famous hospitality, Charleston ranks among the best cities in the south. While you are touring the area, you might like to venture out into the natural world to see some of the landmarks that live outdoors.

This 500-year-old live oak tree is probably one of the strangest sights you’ll see in the woods around Charleston. The massive oak has spreading branches so large, it appears the tree tired of holding them up and just put them down along the ground. The longest is 187 feet from trunk to tip. In height, the Angel Oak approaches seven stories, and at the base, it is 28 feet in diameter. The tree is located on John’s Island, in a park owned by the city of Charleston. As a shade tree, the Angel Oak has no rival. It casts its own shadow over 17,200 square feet of ground. Some say the celebrated tree is over 1,500 years old, but no one wants to cut down this sacred being to count its rings. 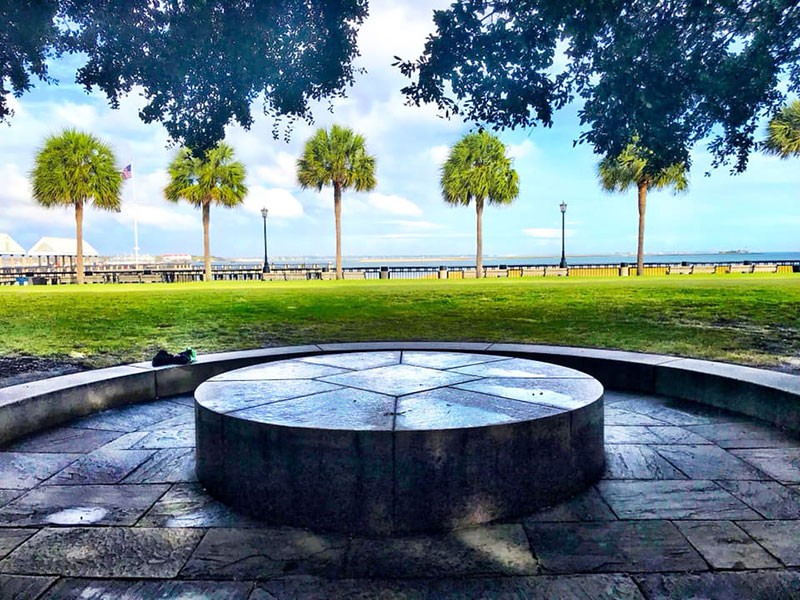 Charleston’s Joe Riley Waterfront Park opened to the public in 1990, providing access to panoramic views of the harbor and its busy shipping traffic – with huge cruise ships, tankers, and container ships gliding in on the tide. The park has a walkway along the water with old-fashioned park benches perfect for the park’s favorite sport: people-watching. There are two fountains, and in the sultry days of summer, it’s perfectly fine to let the children play in their cooling waters.

About halfway between the fountain at the north end of Waterfront Park and the famous Pineapple Fountain, you’ll find the Echo Rock. It is a round pedestal within a sort of dry moat. Climb up and stand near its center. Then speak, or sing. The sound that echoes back is your voice, bouncing off the rock’s surface. It’s entertaining, to say the least (especially for the people-watchers).

The Edge of America at Folly Beach 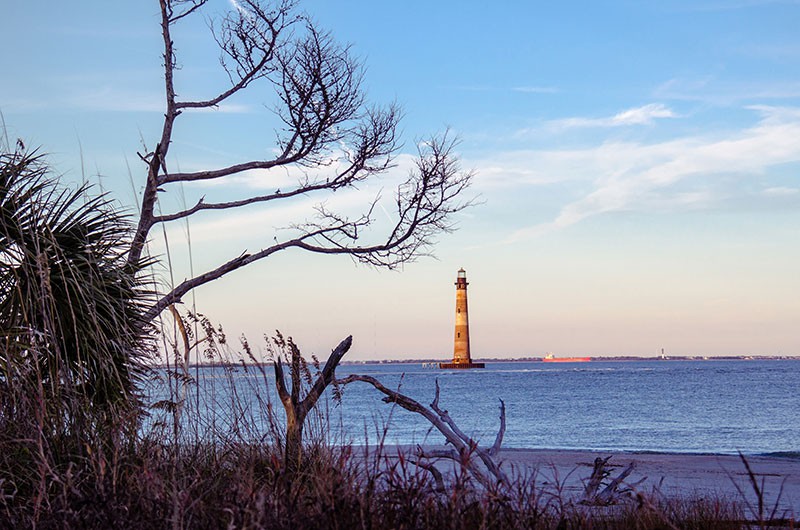 Folly Beach, SC, is a traditional beach town just a few miles from downtown Charleston. Picture six miles of wide beach on a 12-square-mile barrier island, where people surf, kayak, lie on oversized towels and enjoy coolers full of beer and picnic food. A few steps away, you’ll see the typical beach-style boutiques selling flip-flops, sunglasses, bikinis and souvenirs. Amid the small storefronts, there are seafood restaurants serving local shrimp, oysters and chowder. Colorful bars with live music light up the night, and rooftop dance clubs entice partiers all along Center Street. It’s a vacation from the past, unspoiled by high-rise development.

Folly Beach is called “The Edge of America,” a nickname created (and copyrighted) by a couple of surf-shop owners. Others call it “Mayberry by the Sea” for its small-town vibe. There are 2,400 year-round residents now on the island, and a thriving tourist trade. Rent a cottage there and enjoy a few relaxing days and nights - the beach vacation you remember from your childhood.

Center for Birds of Prey

A few miles from Charleston in nearby Awendaw you’ll find the Center for Birds of Prey, a conservation and education aviary housing nearly 50 species of eagles, falcons, hawks, owls, vultures and other birds of prey from all parts of the world. The center offers a self-paced walk in the woods where immense cages house the majestic birds and signage teaches about the different species and the dangers they face. A favorite spot is the owl wood, where you can observe an international collection of wise-looking owls.

The highlight of a visit to the center is the flight demonstration. Don’t miss this particular experience. It is amazing to gather in a natural field and watch the raptors soaring in the sky, gliding and diving in a demonstration of their natural hunting behaviors in the wild. 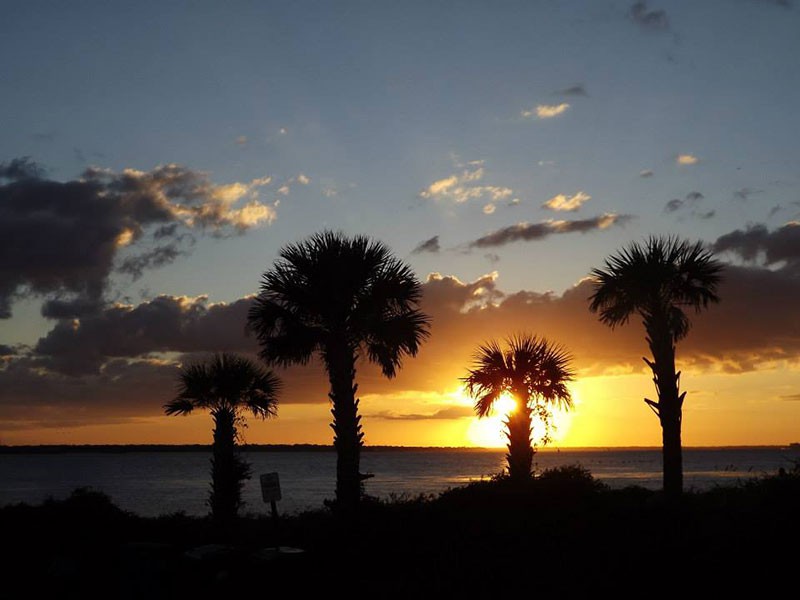 As we get ready to leave Charleston, there is one more place to visit, and it’s best to go at sunset. Fort Moultrie, predating Fort Sumter by almost a hundred years, was a fortification built on Sullivan’s Island to protect Charleston Harbor. The old fort, built of palmetto logs, forms the image on South Carolina’s state flag. It’s easy to visit the fort, and makes for an interesting afternoon jog into history.

A dirt road just past the fort leads to Fort Moultrie Beach, a tranquil cove protected by grassy dunes. It’s a secluded spot where you can often see dolphins arcing gracefully through the waves, hunting for food. Sunset here has been called one of Charleston’s greatest gifts. Turn toward the west, relax, and breathe in the ocean air as you wait for the show to begin.

Find a hotel in the Southeastern U.S.

Where To Stay for a Romantic Charleston Getaway