17-Mile Drive: The Only Reason to Leave CA1

17-Mile Drive: The Only Reason to Leave CA1

CA1, or California’s Pacific Coast Highway, hugs the west coast of the U.S. from San Francisco to San Diego, offering some of the grandest ocean vistas in the world. Heading south, the rugged hills and canyons on your left slope down to the wild surf far below the highway on your right. Though some would say you’d be crazy to leave this legendary highway, there is a section of coastal road called the 17-Mile Drive that leaves US1 behind and ventures out along the Monterey Peninsula, through Pacific Grove and Pebble Beach. This camera-ready scenic drive stretches from the city of Monterey to Carmel-by-the-Sea. 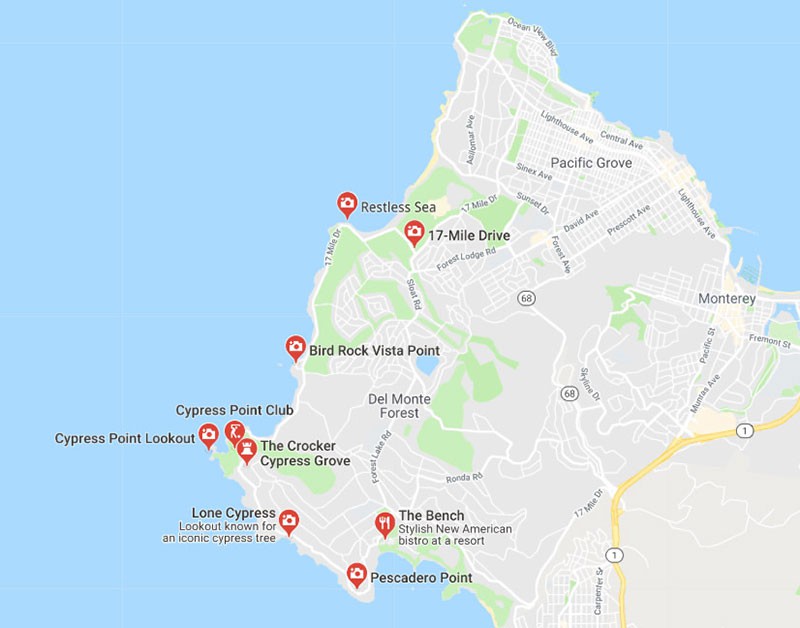 Entering Monterey on Del Monte Avenue, you’ll get nice views of Monterey Bay on your right, but you’ve already been following it since you crossed through Santa Cruz. It’s a huge body of water full of protected marine life, and the beaches in some seasons are literally covered with northern elephant seals and California sea lions. (Stay away from these huge mammals. If you scare a nursing mother, she may escape into the ocean and abandon her pups.)

Heading north into town, you’ll be on the way to historic Cannery Row and the Monterey Bay Aquarium. If you have the time, spend a day at this massive research center. It is one of the best aquariums in the world, with 45 interactive exhibits showing marine life. The Open Sea Exhibit alone is worth the price of admission. Rare sea turtles, stingrays, sharks and schools of native fish inhabit thousands of gallons of water where visitors can view the sea creatures up close. (Don’t miss the sea otters – they’re adorable.) 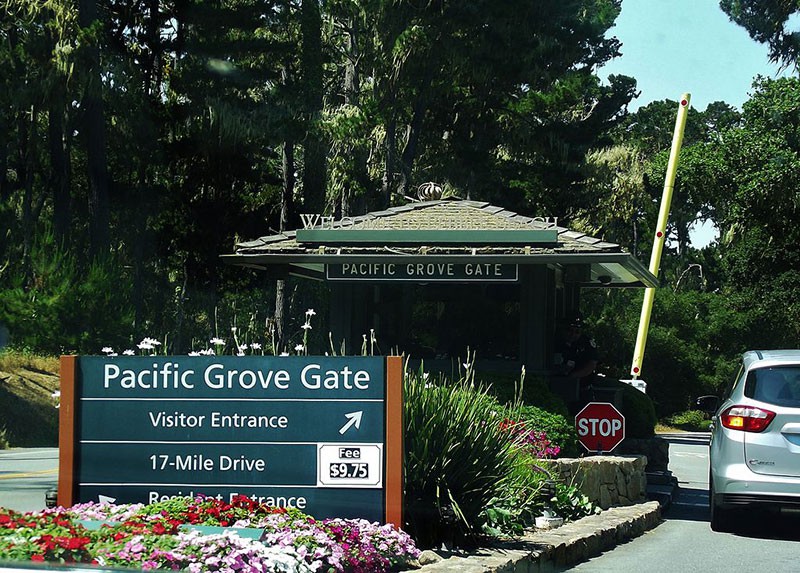 At the intersection of Del Monte Blvd and Esplanade Street in Pacific Grove, you’ll see the entrance to 17-Mile Drive. It is the only private toll road west of the Mississippi, and the toll is currently $10.25 per vehicle. The famous portion of 17-Mile Drive then begins a few miles south of this point. The route allows you to explore at your own pace, with frequent turnouts and parking areas. It traverses forested hills as well as oceanside stretches and takes you through some of the most revered golf courses in the country. (The toll is waived for bicyclists, but it’s not an easy ride. If you dine or shop along the route, your toll can be credited to your purchase.)

Spanish Bay – It’s called Spanish Bay because a Spanish explorer camped here with his ship’s crew in 1769 while he was searching for Monterey Bay. There is a big parking lot here and a lovely beach, but it is not as quiet as some of the stops farther down the road. 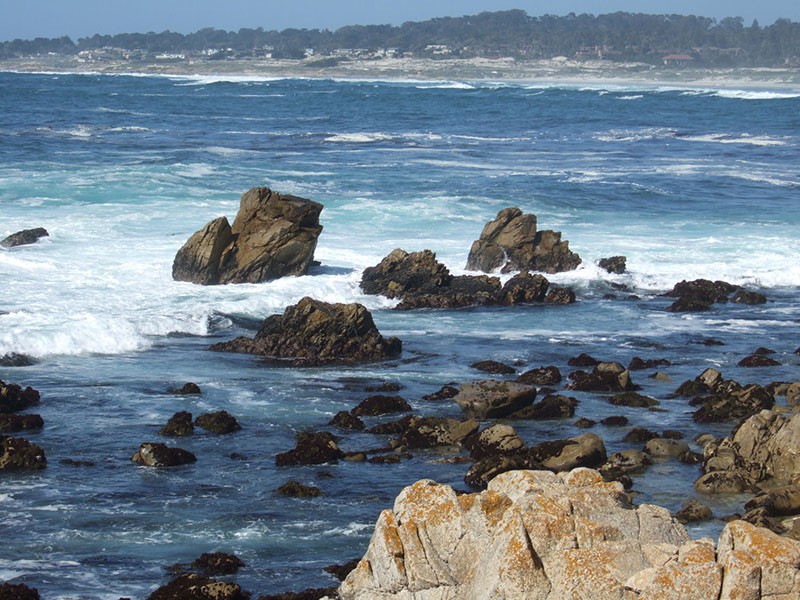 The Restless Sea – “Why is the Sea So Restless?”, the sign asks. This part of the shore is fairly rocky, with large granite boulders and very coarse, dark sand. Underwater rocks tend to make the seas seem restless by breaking the oncoming waves. The sign explains this phenomenon. (Signs along the way are instructional, interesting and well worth photographing to read later.)

Point Joe – In the early 1900s, a man named Joe built a driftwood shack on this beach and eked out a living selling shells and agates to tourists. It’s not clear if the area is named after him, or if he adopted the name to match the place. Several ships were wrecked on the rocks in this small bay, some thinking it was Monterey Bay to the north. 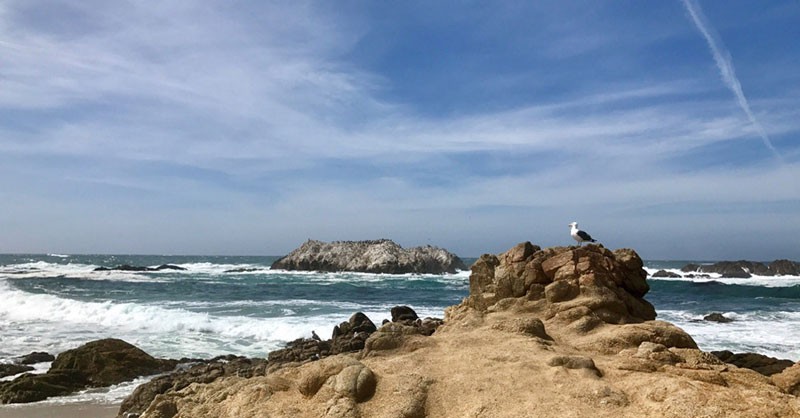 Bird Rock Vista Point – There really is a rock, and it is usually covered with cormorants and other shore birds. This area is a nice place to stop for a picnic, with ocean views, tables and a seaside trail. (You’ll know it’s Bird Rock by its white color – Eww.)

Fanshell Overlook – Harbor seals can often be seen here on the beach and the rocks, and also at Cypress Point Lookout. However, between April 1 and June 1, this overlook is closed to protect the mother seals and their very cute newborn pups.

25% Off Stays In Santa Barbara

Cypress Point Club and Lookout – For golfers, there is a unique course here set in the coastal dunes and the Del Monte forest. The finishing holes of the course, along the rocky coastline, feature a challenging 16th hole where you have to make a 230-yard tee shot over the Pacific. At the lookout, you can see the 5,300-acre Del Monte forest of Monterey cypress trees to the east. This is a rare tree that grows only here and at Point Lobos just south of Carmel. The largest can grow to be 70 feet tall, and the oldest live about 300 years. 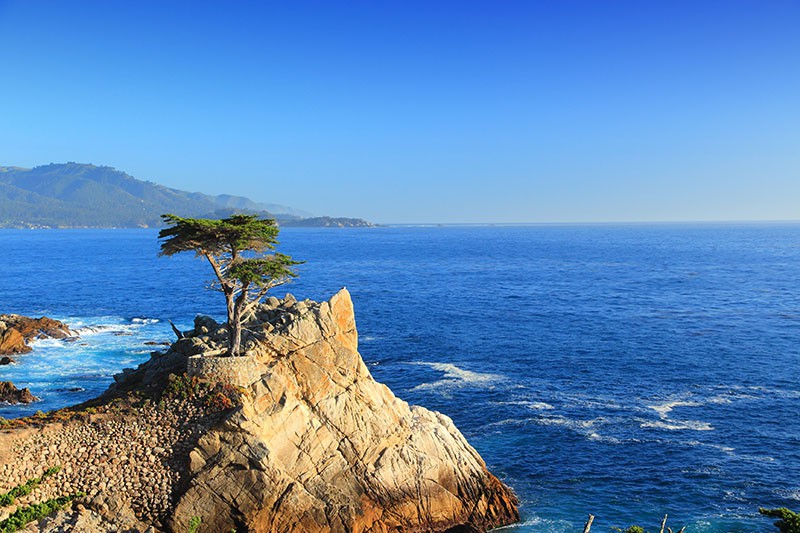 The Lone Cypress – Probably the most-photographed tree in California, this spunky cypress tree took root on a rocky outcropping by the ocean and has been enduring winds, waves and weather all by itself for decades. It is the living definition of iconic, as Pebble Beach uses an image of this tree as its logo. (Okay, the General Sherman Tree in Sequoia National Park might be photographed more, but this is definitely second.) 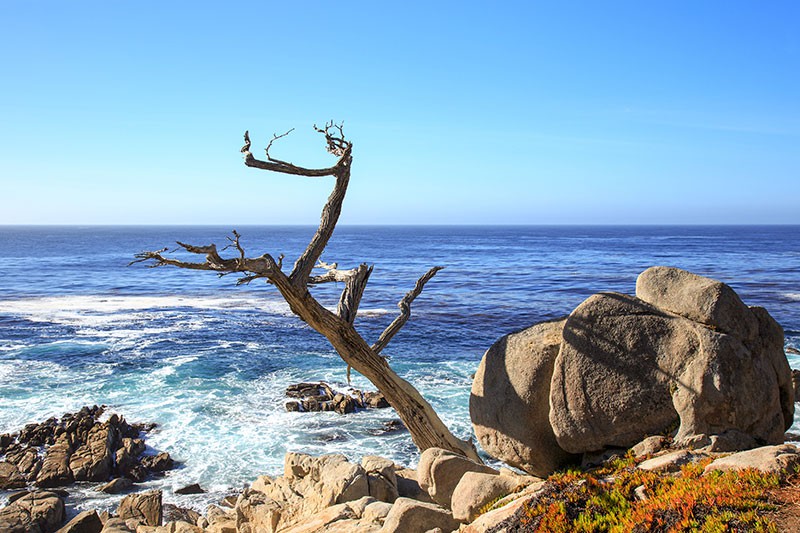 Ghost Tree – This is a cypress tree that didn’t make it. Really, it’s just a dead log but people liked the way it looked, hanging from the rocks over the water, and built a wall around it to keep it in place. (People are strange.)

The entire route will take around three hours, and you can get back on US1 in Carmel-by-the-Sea. If you’re still traveling south, you’ll have even more scenic vistas at Point Lobos, the Carmel Highlands and Big Sur. Many state parks border the historic Pacific Coast Highway, offering picnic and camping sites along with dramatic ocean views. Of course, you may be tired of looking out at the endless blue Pacific by then. (Not likely.)

Day in Monterey… Hitting All the Local Highlights